How strongly, where and by which mechanisms will climate change and weather extremes affect the German federal transport infrastructure and its use? Which adaptation measures are available or can be developed? These questions are addressed within the topic area Climate Change Impacts and Adaptation, which aims at increasing the climate resilience of the federal transport system. Researchers have combined knowledge of the involved authorities (DWD, BSH, BfG, BAW, DZFS/EBA, BAG and BASt), merging information on climate development with knowledge on the three transport modes: roads, railways and waterways. By using uniform data and methods, the impacts of climate change are explored in a cross-modal approach for the first time. The results are already being used by policymakers and transport system operators in the form of index maps, methodologies or case study reports, for instance.

The climate impact analysis and beyond 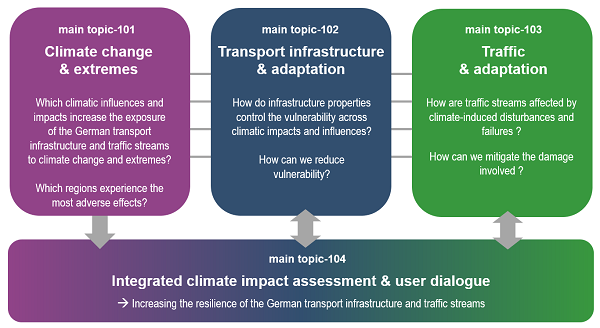 Main topic structure of the topic area since 2020

Following the steps of the climate impact analysis, the experts explore linkages between climate change, its impacts on the transport sector and potential adaptation measures:

High spatial and temporal resolution datasets contribute to assessing the impacts of climate change and extreme weather events in particular. At present, the researchers are analysing the following climatic influences and impacts on the transport system:

Cooperation and networking with tangible results

Networking activities and exploiting synergies from the cooperation with infrastructure operators, federal/state-level authorities, research institutions and neighbouring countries are key to answering numerous research questions within this topic area. The outcomes contribute to the ongoing development of the DAS core service "climate and water", which was founded by the Federal Government within the German strategy for Adaptation to Climate Change (DAS). The service makes the topic area’s research results permanently available for political and operational decision-making and planning processes. The findings can also be accessed via the federal and state governments’ Climate Preparedness Service, the German Climate Service or the BMDV’s mCloud.

The researchers have analysed current climatic conditions as well as expected future climate changes to determine the potential impacts on the federal transport routes. This has resulted in the following key outcomes: